On September 29, 2016, Zausmer shareholders Jeremy Mullett and Jim Wright concluded a three-day trial that ultimately culminated in the entry of no cause verdicts against the plaintiffs.

The third-party automobile negligence action, litigated in Huron County Circuit Court, was brought by a husband and wife involved in a rollover accident who sought non-economic damages for pain and suffering, excess wage loss damages, and loss of consortium damages.

The husband alleged that because of the accident, he sustained several serious injuries and complications including pulmonary embolism, deep vein thrombosis, right rotator cuff tear, and damage to his right thigh and right calf. He also claimed exacerbation of coronary artery disease and peripheral arterial disease, as well as headaches and an injury to his right eye. These injuries, he argued, prevented him from returning to work, which caused him to suffer excess wage loss including the loss of a multi-million dollar deal to sell one of his companies.

The plaintiffs’ initial pre-trial demand was $4 million. The parties appeared before a case evaluation panel that recommended awards of $200,000 for the husband and $50,000 for the wife’s loss of consortium claim. The plaintiffs rejected the evaluators’ recommendations.

Thereafter, Jeremy and Jim filed two motions for partial summary disposition – one to dismiss the excess wage loss claim, and the other to dismiss claims related to the alleged deep vein thrombosis, pulmonary embolism, exacerbated coronary artery and peripheral arterial disease, headaches, and right eye injury because there was no medical evidence to support them. The court granted the motion on the excess wage loss claim but denied the second motion to dismiss the other claims.

The plaintiffs’ demand went from $4 million to $2 million within weeks of trial, and on the eve of trial, they reduced their demand to $900,000.

The case proceeded to trial, and during closing arguments, the plaintiffs asked the jury for more than $900,000 – $100.00 per day from the date of the accident until some point in the future based on projected life expectancy.

After deliberating less than 90 minutes, the jury returned a verdict for the husband only in the amount $54,750, with a no cause of action verdict for the wife’s loss of consortium claim. The verdicts would have resulted in a net loss to the plaintiffs because it triggered case evaluation sanctions of nearly $120,000 in costs and attorney fees that the plaintiffs would have to pay defendants.

Congratulations, Jeremy and Jim, on an impressive win for one of our valued clients! 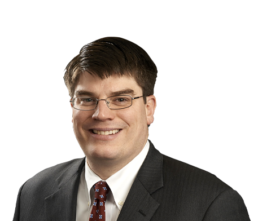