The plaintiff claimed that she fell on a patch of black ice on the sidewalk outside of her apartment building, sustaining injuries to her back and legs. She alleged that the landlord violated its statutory duty to keep the walkways fit for their intended use, and argued that the presence of an icy patch rendered the sidewalk unfit to walk on. She also argued that a “dip” in the sidewalk constituted a “defect” that contributed to the formation of the icy patch she fell on, which she claimed was a violation of the landlord’s statutory duty to keep the premises in reasonable repair.

During discovery, the plaintiff produced photographs showing naturally accumulated snow on the ground and a patch of ice on a portion of sidewalk that was otherwise dry. At her deposition, she testified that she always stepped in the area of sidewalk where the icy patch was located because it was more convenient to walk to and from her vehicle, but when pressed she admitted that an alternate route was available that day through entirely dry pavement. In fact, the plaintiff stepped in that very spot the night before her fall and did not encounter ice, and her fall happened early the next morning while she was walking to her vehicle.

Dan secured the plaintiff’s testimony that she routinely observed the landlord’s maintenance staff shoveling and salting in the winter, and that she had never previously encountered ice – and had no evidence of uneven pavement – in the area of sidewalk where the fall occurred.

Dan filed a motion for summary disposition, arguing that the landlord did not have notice of the alleged black ice condition, and that the ice was “open and obvious” due to the cold and snowy weather that raised an “indicia of a potentially hazardous condition.” Dan also argued that the landlord did not violate any statutory duty merely due to the presence of ice, as the plaintiff admittedly could have accessed her vehicle by walking on dry areas of sidewalk and parking lot, and because any uneven sidewalk pavement did not preclude her from walking on it. Wayne County Circuit Court Judge Muriel Hughes agreed and granted Dan’s motion, dismissing the plaintiff’s lawsuit. 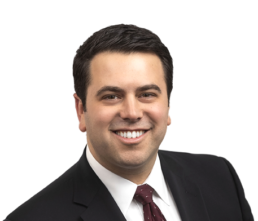